After my sashiko experiment brought on by the textile fumes of the Knitting and Stitching show, I bought myself another kit. This one is a pre-printed cotton square from Cotton Patch in the ‘Blowing Pampas Grass’ design: 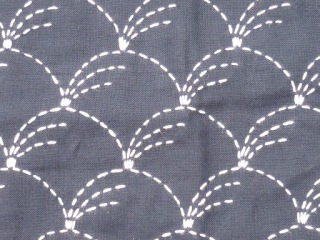 I started it a while ago now, but it got put away to make time for some deadline knitting, but even deadline knitting cannot stand in the way of excruciating knitting-related RSI, so it came out again this week as an alternative to the yarn and needles. 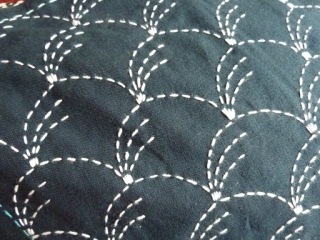 I have finished the other half of it pretty quickly. This time I used an embroidery hoop to help with the puckering I had on the first sampler I did. I’m not sure if this is how it’s supposed to be done but it worked for me!

I decided to buy some variegated blue thread for the border, and it’s worked really well:

At the back you just tie off the threads when you’re finished on a section. I suspect there is a method for the order in which to sew the pattern, but I made it up as I went, eventually deciding to do all the big arcs at once, and fill in the wispy bits after:

I love this so simple method (running stitch is the first thing we’re ever taught when learning to sew, surely) giving such a stunning effect – especially in the blue and white combination – when it’s finished: 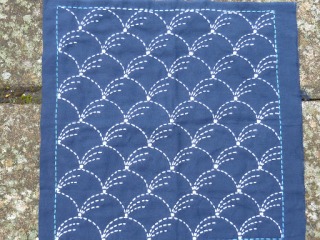 Next step is to add on a border (I have lots of blue fabric) to make this large enough for a cushion pad, it’ll probably need a friend or two as well. But I might come up with my own design for those.