Now then, it’s not often I think of a a thing to do and then do it within a week. However, a miracle seems to have happened, and lo, the sashiko embroidery of the last post is now a cushion, thanks mainly to the long ad breaks in ‘Lewis’ and my being able to find everything I needed to do this almost without trying (almost):

I had some slightly paler blue fabric (I say some, it’s about the size of a single bed sheet – there may be a lot of blue cushions ahead) than the indigo dyed stuff the embroidery was done on. I cut four strips to border the panel and machine sewed them on: 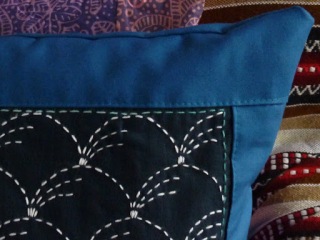 I think I got away with the paler blue fabric with my sashiko border being pale blue, which already set the white ‘Blowing Pampas Grass’ pattern off nicely:

I put a backing in the same blue fabric on the embroidery panel and sewn side strips to stop them from rubbing on the cushion pad and possibly unravelling, and then sewed the whole thing into a cover. I can’t be doing with zips so the bit the pad goes into is an overlap, just like a pillow case. I find if you make this overlap quite large, and double turn the hems it keeps the pad in just as well as a zip, without the trauma of sewing in said zip!:

I’m really proud of this piece of work. Here it is on the stripey throw from Spain (I think it came from Bubion, Andalucia)…: 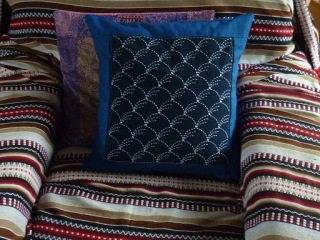 …and again, nestled on the little sofa with a melodeon and a rams and yowes. Which is where I’m headed now.