Let me say first of all, lace and me, we don’t get on *that* well. However, Zuzu’s Petals looked fairly straightforward and I really need to get through some of my stash of small amounts of lovely yarn. I have a lot of yarn which falls into this category, either given as gifts (and you know, I don’t mind that AT ALL, yarn gifters!) or purchased by myself thinking a little bit won’t hurt, but now I find myself with piles of scarf or hat sized amounts of beautiful yarn (and it’s usually discontinued, so I can’t add to it to make larger garments).

I cast on and finished this in a week, and then my mother stole it from me.

The yarn I used was shiny and cosy Debbie Bliss Alpaca Silk Aran [discontinued] in a pale cyan/aqua shade. I intended to knit the  large yarn/fewer repeats version of this cowl, but after a while I realised there was no way it would fit over my head, so I did it in the large yarn with all the repeats intended for the ‘smaller’ yarn (I’ve lost you haven’t I…?). This did the trick.

Once I had got over the odd cast on (totally made sense when I just went with it) found all the stitch markers I needed (a lot)  and my inability to count properly, it flew along, .

Mum encountered this first in its unblocked state and immediately had it round her neck claimed as her own. I insisted it would be even more lovely once blocked so it went on a pillow well away from The Black Cats:

By the magic of blocking the pattern is revealed (the Yarn Harlot has been writing about blocking this week ): 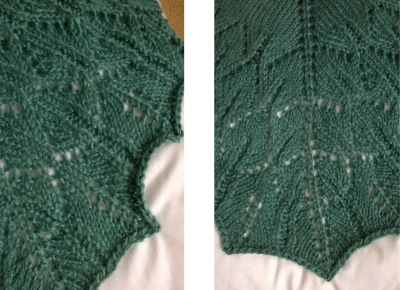 I am so pleased with this that I may need to knit another, or something similar. I have some delicious coolree yarn I picked up at Knit and Stitch the other week, just the one skein…