This seems to have turned into a series, let’s call it ‘exploring the process’. The big surprise to me – after that flash of post Playful Day Knitsonik podcast inspiration – is how my brain has been going overtime with ideas ever since. Not just for this one, but for other colourwork pieces as well. I can hardly keep up. It might be why I left the keys in the front door the other morning…. Anyway, it’s all quite exciting creativity wise and, what with the silver clay burbling away in my mind as well,  I haven’t felt like this in ages. But I must concentrate on this project for now and not go skittering off course. I have my trusty Bullet Journal by my side for the storing of ideas.

I have swatched the first part of this piece, and can see what is terrible and what works.

The sun and moon are nicely abstract, though I will do them in a very pale yellow. I like this glowing dark blue, it reminds me of warm summer nights on a dig site (nowhere near Stonehenge) dancing to Santana and drinking cider. Excuse my giant hand, it’s a curly stocking stitch edge: 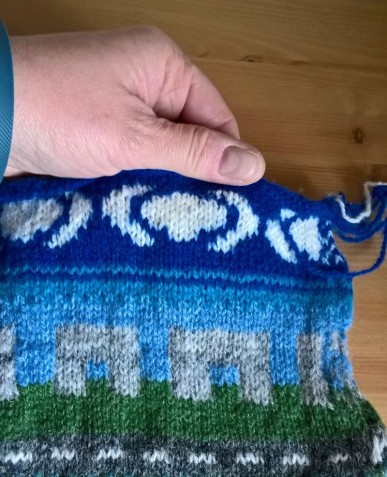 The Trilithons are terrible, the colours are a muddle.  I had more than one colour going into each row, which I can do, but it’s a huge tangly faff and hasn’t worked here. It might work in another thing though. I really want something more graphic, so back to the drawing board for those:

I think the road looks good but may need to be elsewhere in the design, and the  grass verge works better as a speckly pattern – green and blue – than solid green. I’m going to try one of the Jamieson & Smith green ‘mix’ colours in the second swatch:

The next part of the design represents the things found in Bush Barrow in the 19th Century, specifically two famous finds, the lozenge and the axe head. The lozenge is still shiny to this day, the axe head would have been as well (both are bronze) and I wanted a bright pop of colour, so decided on this yellow. The background represents  what happens when you dig on chalkland – grass on top, then brownish poor soil, grey, then the white chalk beneath –  but I’d like to change it about a bit, make more gradations between the layers: 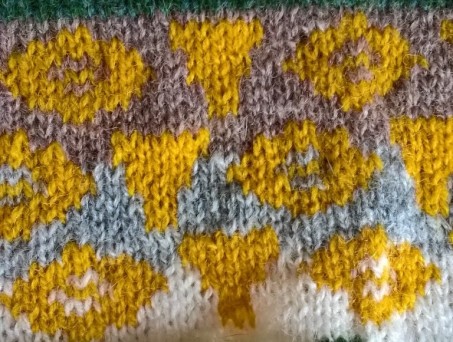 The final detail is this wiggly line, which is there for the sight of barrows on the horizon. Barrows would be constructed not just for burial of the dead, but – it’s thought – to mark territory, they are often found on watersheds and the tops of hills. If you stop and scan the horizon round Stonehenge you’ll see quite a few: 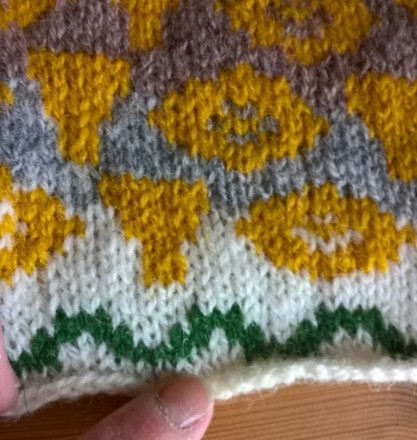 So there’s a lot to change due to my need for knitterly perfection (see below – that piece of yarn hanging on the BACK of a SWATCH is really annoying me) though I like the colours, and the general feel of it. I have had to order more yarn, obviously. Come back for  Part III! this is only half the design….