I like deadlines, not in the way Douglas Adams did, with the ‘whooshing sound they make as they fly by’ but because I really am so liable to go bimbling off on a tangent, doing something I shouldn’t really be doing,  that a deadline is a good point to concentrate on. I very rarely miss a deadline (I feel quite mortified if I do).

The deadline for the Haps Are Happening KAL – run by Jen Arnall-Culliford and ‘Veuve Tricot’  for the Kate Davies Book of Haps – was 8th August 2016. I looked at the timescale and thought that was a totally do-able schedule and,  to my surprise, I managed to produce not one but two haps during this KAL (though I did put aside all other knitting – poor old Stonehenge – what did I say about going off on a tangent…?).

I’m going to talk about my second Hap first – the Nut Hap;  a completely brilliant piece of knitting design and engineering by Jen, which includes really concentrate-y stuff; you need two super long needles, it has a tubular cast on! it has K1P1 rib with short rows, it has tucks, it has five colours, and you have to graft it at the end The challenging bits are interspersed with nice television friendly easy knitting (in this case the television was Being Human – the first two seasons are the best, IMO).  I like this kind of thing – you get to use your brain and then rest it for a bit.

So it went a bit like this (look! I have done you graph…). The bit where the stitches supposedly being HELD BY the back needle FELL OFF the back needle was my favourite part: 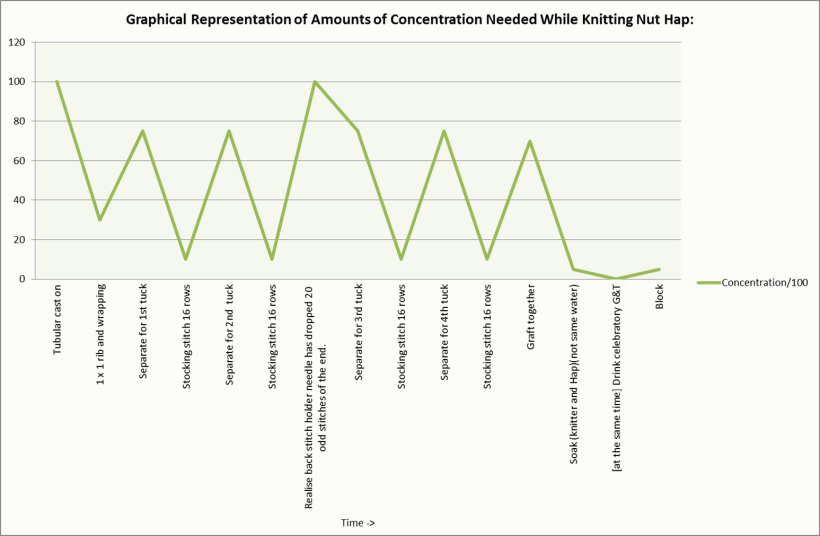 I posted a lot of pictures of my knee and my knitting on Ravelry and Instagram, which made a quite pleasing sequence.: 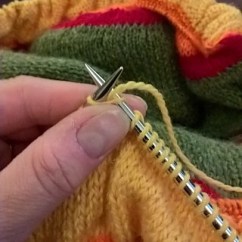 I finished with one day to spare – though I confess when the finished photos were taken this Nut Hap may have still been slightly damp. It’s also a rather warm accessory for an August modelling session.  I’m really looking forward to wearing it on a European or Canadian mountain in the winter and if I think about this enough maybe it’ll actually happen.

[ an aside – notice how the cat is barely able to feign interest in this Hap, when I hear of other people’s cats they seem much more interested in the knitting than Boris is].

An idea given to the Nut Hap knitters – the original pattern has its colours based on those of the nut hatch –  was to choose a different bird for inspiration . Just a couple of days before the KAL started I happened upon a news story about the Red Faced Liocichla. This bird was though to be locally extinct in Eastern Nepal (it hadn’t been seen for 178 years) but has recently been found alive and well, and apparently breeding – such lovely news when we’re losing so much every day. So I chose this bird for my colour inspiration:

These bright colours will be a boost in the winter, when this Hap will come into its own. I knitted it in Cascade 220 Sport Superwash, which is a light worsted 100% yarn; super warm and yet not super heavy, and comes in about a bazillion colours. I really love this yarn – I made a jumper for my husband with it last year – it washes brilliantly with hardly any colour bleed. Also it looks really good draped casually over my favourite turquoise garden chair:

Next time (or next time but one, I haven’t decided yet) the marvellous Montbretia Hap!