In my imagination a walk through the woods with the boy would be carefree and happy, he would be running along ahead skipping through the leaves and have a jolly time, while the husband and I follow on hand in hand discussing what we’ll have in the pub for lunch at the end of the walk (this pub, of course, has a roaring fire and doesn’t mind the filth you’ve walked in on your shoes). It would be an idyllic autumn day, slightly chilly and yet not freezing cold, just cold enough for a nice knitted scarf to be needed…sounds lovely doesn’t it.

Of course many people reading this who go out walking with children who are at an age when they actually have to do the walking will know the above doesn’t really happen. My boy really did enjoy being pushed along in a buggy or riding in splendour in a backpack like a Mughal prince in a howdah (the part of the elephant being played by whichever parent was feeling strong enough for the task that day), he’s yet to be convinced that going along on your own two feet is really quite good fun, so there is a lot of:

“Are we half way yet” (Dairy Milk shaped bribes have been offered at halfway); “Are we nearly back at the car yet??” (not just yet, no I don’t know how long it’ll take, yes I expect it won’t be too long); “MY SOCKS ARE WET” (I have no spare socks); “WHY do grownups like walking ALL THE TIME??” (with a roll of the eye). Occasionally he’ll find an interesting stick, an intriguing spiky seed case, or a tree to hide behind, and be happy for a moment. I try to encourage this as I don’t want him to be put off walking for life (in my old age, I’m going to need someone to help me over the stiles). So, there are ways to make it less of a forced march apart from bribery – don’t discount it though – and today’s walk was brought to you by the ‘if you catch a falling leaf you can make a wish’ scheme.

These particular leaves were falling in Wytham Woods. This is a woodland owned by the University of Oxford, a ‘laboratory with leaves’ carrying out world class environmental research. One of its ancient oak trees was the star of a BBC Four programme about the life of the tree and the life it supports as an ecosystem (as I write this is available on the BBC iPlayer, one of the best 90 minutes of television you’ll ever see). The woods crop up often in Inspector Morse and spin offs, as a place to hide a body (not a good one apparently – Inspectors Morse, Lewis or Hathaway always find them) or, in a particularly strange episode of Endeavour, a dodgy aristocrat was keeping illegal tigers up there.  We set off with no particular route in mind, but hoping we’d encounter neither tigers or corpses this Halloween weekend.

Thankfully there were no tigers. We chatted to some lovely sheep (Cotswold I think) and did a spot of shepherding. The boy is very polite as a shepherd, there was no chasing, he was directing them as if they were traffic and he was one of those traffic policemen they have in some countries (you know, the ones who stand in the middle of terrifying cross-roads and manage not to get squashed?) not sure how he’d do as a real shepherd, but I’m pleased he’s coming round to the joy of sheep.

Once through the sheep field we found ourselves in the woodland where it was properly autumnal, even – dare I say – Christmassy, with our first siting of a holly bearing a berry this year. A hugely impressive woodpile is stacked alongside this track, a pile over seven feet high with notices telling you NOT to climb on it (tempting though it may be).

This was about the half way point – aka chocolate break and chance to complain about the feet which have walked ever so far, so we started the leaf catching game. This is not as easy as you might think, You spot a leaf and think you’ve got it in your sights. put your hand out and the leaf veers off at the very last minute. You have to concentrate pretty hard, keep an eye on the breeze, listen for  stuff clattering through the canopy and, once a leaf is spotted, be prepared to leap sideways rugby tackle wise after your quarry. We all got one in the end, and a discussion of leaf aerodynamics into the bargain. 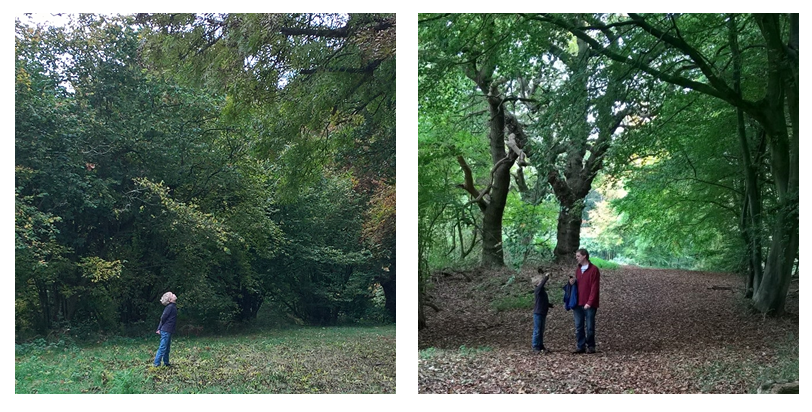 Leaves caught, and a walk through some more sheep and possibly past the television famous oak tree, we got back to the car where coffee/apple juice and malt loaf awaited us (and I kind of wish I’d packed dry socks as well, I’ll make a note to remember in future).

If you wish to walk in Wytham Woods you need to get a permit – the woods were bequeathed to the University in 1943 by the ffennell family after the death of their only child, on condition that the woodlands were also left for the enjoyment of the people of Oxford, and a permit system allows access to over 32 km of paths and rides. You can use this online form to apply, permits are free, so it’s nice to give a donation if you can.