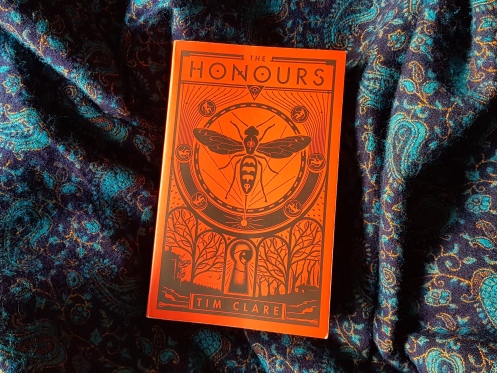 The Honours by Tim Clare (Canongate)

I have absolutely no idea how I happened upon Tim Clare on Twitter – some algorithm sorcery no doubt  –  but I’m glad I did. I wrote a little bit about his fab podcast ‘Death by 1000 Cuts’  in this post, have had some excellent board game advice from him, and now I’m going to try to tell you about his very brilliant novel ‘The Honours’.

I say I’m going to try and tell you because I don’t think I can really do it justice. I’ve been mulling this book over in my head since I finished it at the end of November, but here goes…

The Honours is set in 1935  in a sanatorium out on the remote coast of Norfolk. The place has a small staff and, I think, not very many patients .  The grand house the sanatorium occupies is the family home of Lord Stokeham,  last in the line of what was once a great aristocratic family. There is a distinct atmosphere of paranoia, secrecy and – I can’t think of a better word – weirdness about the place. When our heroine Delphine arrives with her mother and psychologically troubled father – a veteran of the First World War and a painter – and  she is determined to find out what’s really going on here.

Delphine Venner is thirteen and her head is full of spy stories (I immediately thought of The 39 Steps, Riddle of the Sands and any of the gung-ho adventure comics of the time).  She fears Bolsheviks taking over the country – and this is hardly surprising, the papers were pushing an agenda of threats on the horizon from Germany and Russia; there was an atmosphere of paranoia at large, a lot of fear about, and a lot of misinformation feeding that fear. Does this sound horribly familiar? It should.

Delphine is fearless, angry and is often underestimated by adults. She loves her father very much indeed, but her relationship with her mother is difficult. Delphine has some troubling history herself; a terrible event happened at her school, which she has now left. Was she to blame,  is she a delinquent?. Delphine is not at Alderberen Hall for treatment, she’s simply been brought along by her parents and, once there, pretty much abandoned to her own devices and imaginings.

At the start of this book I wasn’t sure what to make of Delphine; she sneaks about the house in the gaps between the walls, roams the grounds and woods with a pair of ferrets on strings,  gets copies of keys made on the sly, spies on people, goes where she’s told not to go and takes apparently insane risks all the time. She could be quite unlikeable if she had not been written so well, could have been a bit of a brat. But she’s no brat – Delphine is  brilliantly clever and very loyal, especially to her father and to Mr Garforth, the gamekeeper, who becomes one of her only friends.

As the story progressed I felt more and more empathy for Delphine – a young adolescent who is not being listened to (I think we’ve all been there) who knows there is something bad afoot, knows that this place is not at all healthy. She’s astute enough to understand that the adults living and working at the hall are hiding something, possibly something terrible.

The adults are a rum bunch, among them Delphine’s parents; cold-hearted Anne Venner (always referred to as ‘Mother’) and beloved though troubled Daddy, Gideon. The awful Dr Lansley – a phenomenally rude individual who immediately dislikes Delphine, or maybe children in general; Mr Propp, who we first find plotting in a room as we spy with Delphine; Miss de Groot – a waspish ‘society lady’ type; Lord Stokeham (Lazarus) who also appears to be in on some kind of plot; Mr Kung, a mysterious Chinese gentleman, Professor Charmichael, who becomes Delphine’s rather haphazard tutor, and Mr Garforth – the gamekeeper and Delphine’s comrade – she spends a lot of time with him, he teaches her how to shoot.

The very first scene of The Honours is unsettling. It drops us into the heart of later action for a couple of pages, and then we are taken back to nine months previously. As a reader I was immediately intrigued…it seemed unlikely that what had happened could be real, it’s very dark.  I tried very hard to second guess the writer all the way through this but it is not a straightforward tale. There are local legends about the house, about under ground tunnels and eccentric ancestors, and are there strange creatures abroad – or is Delphine imagining things?.

As the story progresses it becomes ever more extraordinary. It is fantastic in the unreal sense of the word, yet it is never unbelievable. It’s about fighting for things you believe in and being brave in the face of impossible odds. It’s action packed, with excellent fight scenes, races against time and lots of peril – brilliantly channeling the adventure stories a 1930s child would have read. I found myself reading it  well into the night*, trying to find a stopping point (luckily it has chapters, but even those prompts were hard to keep to!).

If you love a feisty heroine, a mystery and darkly fascinating happenings in a book that will really make you think while being hugely entertaining (and which has footnotes!)** then I’d urge you to read The Honours (the cover is ace too, a mystery in itself waiting for you to decipher it).

The next installment of Delphine’s story, “The Ice House” will be published in May 2019 and is available to pre-order now (which I have done, obviously, and I cannot wait to read it).  All the details on pre-ordering are on Tim Clare’s website here, along with a podcast series on The Honours (four episodes) (I would suggest you read the book first).

3 thoughts on “Review: The Honours”